Update 12/2011: The manual has a short updated chapter on this subject.

The latest version of MailMate is the first one to support automatically inserted signatures. This includes configurable top/bottom placement of signatueres. In the following, I will describe how it works in MailMate which is not how it works in most email clients.

Automatically inserted signatures is one of those features which sounds really nice on paper, but rarely works well in practice. I never continued to use this feature in other email clients and the main reason was that I most often replaced the inserted signature with something else. One problem was that my default signature was a relatively long signature which was appropriate for a new email or a first reply. In practice, most of my emails were to people I knew very well where I did not want to include an impersonal signature, but I did not even use the same signature for all of these people. In the end, it was easier to have no signature inserted and then use a text expander instead.

How it usually works

In many email clients, a selection of signatures can be configured. For example, Thunderbird supports a single signature for each identity/account and Apple Mail supports multiple signatures for each account. A signature is inserted into new emails and it may then be possible to manually select a different signature (Apple Mail). The placement of the signature (top or bottom) is a separate preference option.

How it works in MailMate

MailMate takes a different approach to the problem. The choice of default signature is based on the main recipient of the email rather than the account/identity used. MailMate simply looks for the most recent email to the same recipient and reuses the choice of signature. The same is done for the choice of top or bottom posting. Changing these choices will then affect any future emails to the same recipient since the email will become the new most recent email. If no previous email exists (with a choice of signature) to the recipient then MailMate falls back to choosing the most often used signature sent using the same identity. 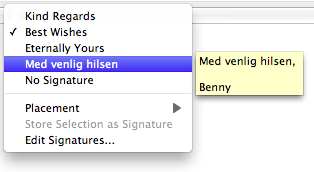 Example: After using this system for a while, I’ll be able to have my preferred signature and signature placement chosen by default in all of the following cases (using a single identity) as long as older messages to the same recipients exist:

The list could be much longer and it does not involve any configuration other than explicitly selecting a signature and top/bottom placement for any emails where the default choices are not desired.

Auto-learning features as the above can be difficult to implement such that it works as expected for all users. Therefore, feedback is very welcome on the subject of improving the choice of default signature.

Note that MailMate does handle the following caveat: If you change one of your existing signatures, for example by updating a phone number, then this will work as expected even when the signature is used in a new email where previous emails to the same recipient uses a signature with the old phone number.

Get emails about new releases:

No more than two emails per year.